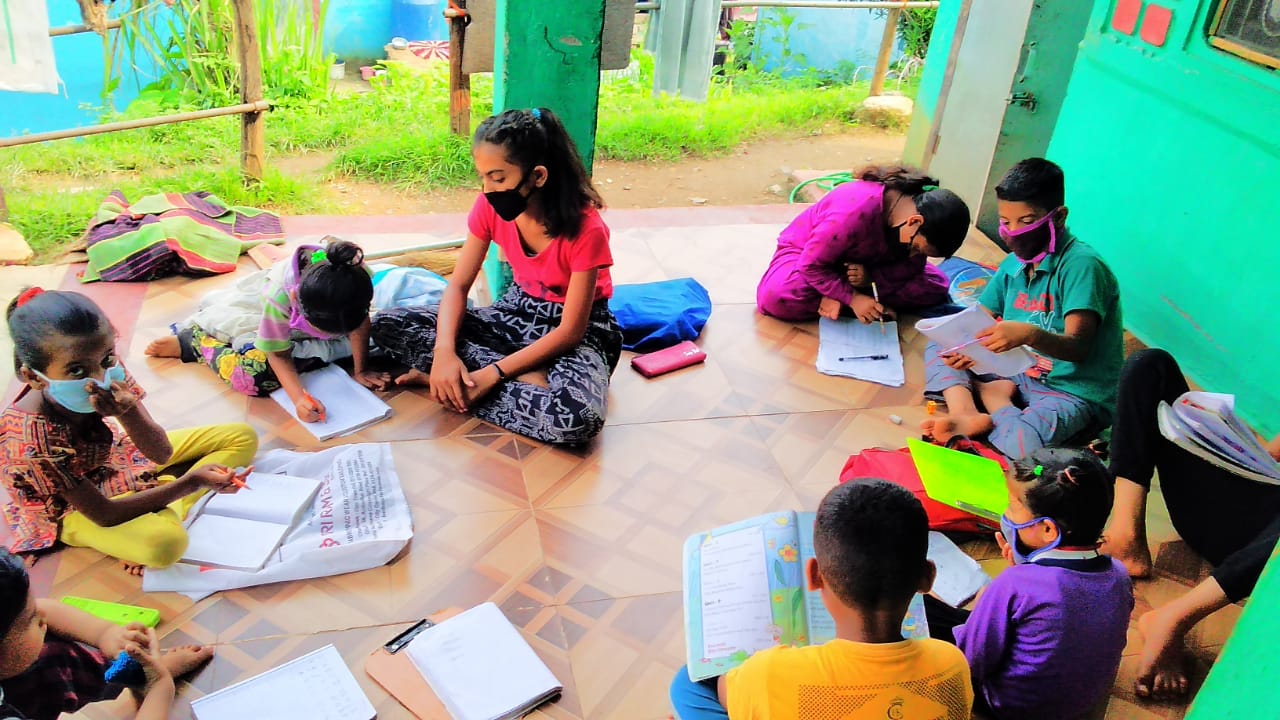 The COVID-19 pandemic has impacted globally. The increasing cases being reported as negative/positive, deaths and recoveries index is alarming. Prevention measures are being disseminated widely to break the chain.

Pandemic has caused severe socio-economic disruptions. Economic devastation caused by the lockdown has affected most of the informal workers, small farmers, and self-employed – who are left with no livelihood in the absence of movement of every sort (transportation and access to market). The impact cannot be judged or compared from one place to another, as it varies as per the region and its situation. Here, the ground realities of a district of Uttarakhand are being shared based on the experience. The facts are accompanied with press media clips too.

The deadly coronavirus may not have spread and caused havoc in the far-flung rural hill belts of Uttarakhand, but the lockdown has hit them hard. The inaccessible remotely located scattered villages with fragile and difficult terrains have posed a quite different type of challenge during the pandemic. Villages, hamlets, and houses located amidst forests and in the region (District Pithoragarh) as a whole, are naturally quarantined. The deadly virus worldwide, has not differentiated between anyone: rich or poor, gender, religion, or caste, but it has impacted different sections and regions differently.

During summer, scheduled tribes from Dharma and Viyas valley of district Pithoragarh, migrate from their lower settlements to their original villages/habitations with their animals (high altitude goats, sheep, cow, and buffalos) for agriculture and extraction of medicinal herbs. The migration starts from 1st April onwards. The lockdown has resulted in both the loss of their domestic animals and of food supply.

Pithoragarh district in Uttarakhand shares its international border with Nepal, Tibet, and China. The trade, labour and even marriages are common at the borders, specifically with Nepal. The borders were sealed putting a brake on mutual trade and locking down all families and individuals in both countries (India and Nepal). As a result, more than 1000 people (many daily wage workers) from Nepal were refused entry into Nepal and were quarantined by the Indian government in different centres across the district.

The rural hill economy has generally been based on - money sent by family members working outside (armed forces and other private jobs in factories and agencies), daily wage workers at construction sites, agriculture labours, land based and business (shops) activities.

More than 5500 people, mainly youth returned to their homes (Pithoragarh) from cities like Delhi, and Mumbai and states like Gujarat, Rajasthan, Goa, and others. They are mostly those who go out in search of jobs and a better future. The age group is between 21 to 45 years. 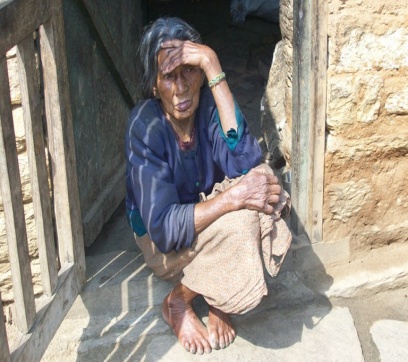 The PVTG Raji Tribe were the hardest hit. They all are daily wage workers and sell dry wood to purchase food items. The lockdown impacted them the most. They live in remote forest areas and were not allowed to come to the road head or marketplaces (Jauljivi and Baram). Majority of them do not store ration for more than 4-5 days. Raji tribe women took money on dept from neighbouring nontribal (better off families) to purchase rice and wheat flour. Now they will return this money by working for them in return. The vicious cycle of poverty has set its trap. 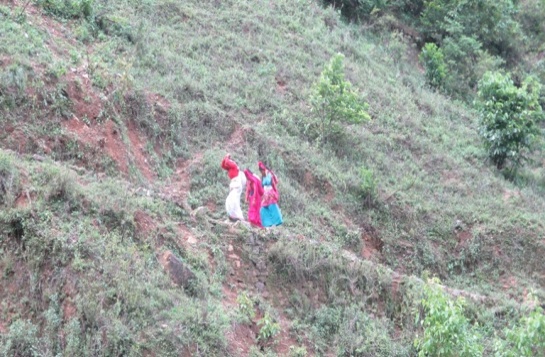 The distance of villages rages from 1 km to 14 km up-hill for the Raji tribe families. The ration distribution from government and other agencies was being carried out at the road head, the families stated they were not informed thus missed the chance of getting ration. It was only after Arpan reached them through Action Aid supported kits that they were able to feed their kids.

Families who depend on the external sources of income from people working in cities were also hit hard. A woman from Dharchula said that her husband works in Delhi in a private company. After the lockdown he not only lost his earning but was also left to fend for himself and the family has no money left for basic needs.

Most of the families requested for cooking oil and necessities like salt and soap. In the absence of cash in hand and not being able to reach the market they were short of such items. 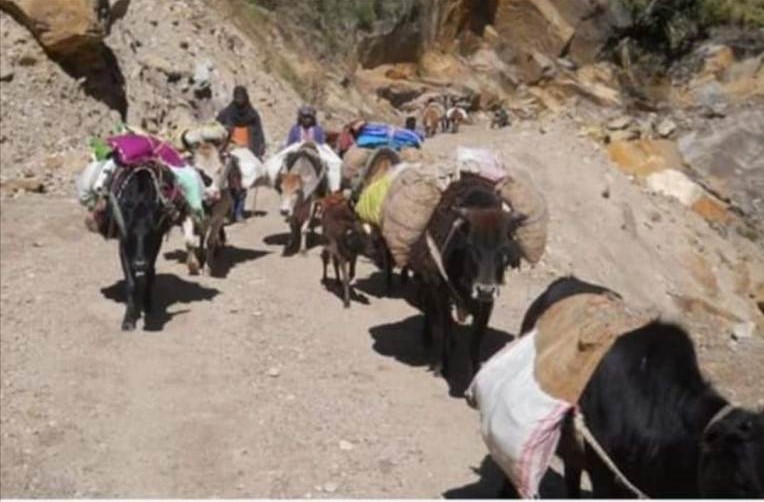 The migrating tribal community faced several problems. Their domestic animals find it hard to live in the lower regions after April, due to rising temperature. The main occupation of farming of this community is in the upper regions/high altitude areas like Darma and Vyas. Due to lockdown they were not getting permission to move. Lack of cash and not enough ration for the family, the community struggled to get pass for movement and ration. They had to walk for almost 3-4 days to reach their destination, thus required ration.

Lack of appropriate planning from the government resulted in late action, but CSOs who were in direct contact with the community, were well prepared to reach out, but the administration was not allowing (vehicle’s and staff for pass) movement. Arpan reached out to 150 most vulnerable families with necessary ration kits in the three blocks (Dharchula , Didihat and Kannalichhina).

Due to road block/land slide most of the trucks loaded with ration/food items and LPG gas cylinder were stranded at the Ghat region, and it took 3 to 4 days for them to reach Pithoragarh and then, further to the remote regions. As a result, the shortage of ration caused several issues like non availability of food items and high prices being quoted by traders until the government took strict action on the PDS system.

The migrant labourers from other states and Nepal increased to more than 1000, the government provided for them by seeking support/contribution of individuals and CSO’s.

The medical facilities in the district were in pathetic state. They became heavily burdened with the increasing demand for check-up of coronavirus suspected people. The health system was fully exposed, and the doctors declared that they will not see the general patients. The situation was and still is quite grim, resulting in problems faced by pregnant women, children, and senior citizens. They were many causalities reported during this period.

The school and college children were unable to access the online classes, either due to network or mostly because families do not have Anroid phones.

Liquor and drug addiction rate are quite high amongst youth and men in the district. Women have contacted through phone and visit have been made to some homes. Men who are addicted and have not been able to get such intoxicating items, were facing down or high syndromes and fight and shout in home.

The administration has been tackling this issue, but mainly in the cities. In the remote inaccessible villages, the locals informed that brewing of illegal arrack is taking place.

A child 16 years was found missing, after enquiry it was found that his mother had yelled at him, thus he left home. Boy complained of discomfort at home.

To conclude, the issue is not only of shortage or lack ration, food, and necessary items for majority of the families, but also of emotional, psychological and violence being faced by many, within the four walls of their homes.

With the lockdown being extended, the voluntary support from individuals is also decreasing, posing more problems for help givers, help seekers and the government.

While distributing ration (from Nai Pahel project emergency budget) to the identified most fragile target families and single women, ARPAN came across many needy families in the villages. Information was shared with the administration. Arpan has identified around 500 families from informal sector either with no document like ration card or aadhar card, senior citizens with no support and information, and people in difficult circumstances. Efforts are being made to link them with government schemes, but delay in the necessary formalities are painful for the isolated, deprived and ignored.

multiple causes . One amongst them is the COVID 19 Pandemic, which has increased the

challenges faced by the vulnerable sections of the society . Log down has impacted the daily

wage earners the most . Crisis of Employment , food , health , and education has created a

During this state of emergency, understanding the fact that poverty and vulnerability are

inter-linked , ARPAN reached out-to people in need , through different means . At the district

headquarters , it was observed that attendant’s accompanying their patients to the district

hospital were struggling to find food outside the hospital , as due to log down all shops were

closed . These people were not allowed inside the hospital due to COVID 19 protocols . ARPAN

District Pithoragarh . During May-June 2021 around 400 attendants were served cooked food .

for their roofs , education kits for children , masks , soaps and motivating the community for

testing and vaccination . Youths , ASHA and Aganwadi workers at the village level were

provided with oximeters and thermometers to check the villagers from time to time .

to the people during this emergency . 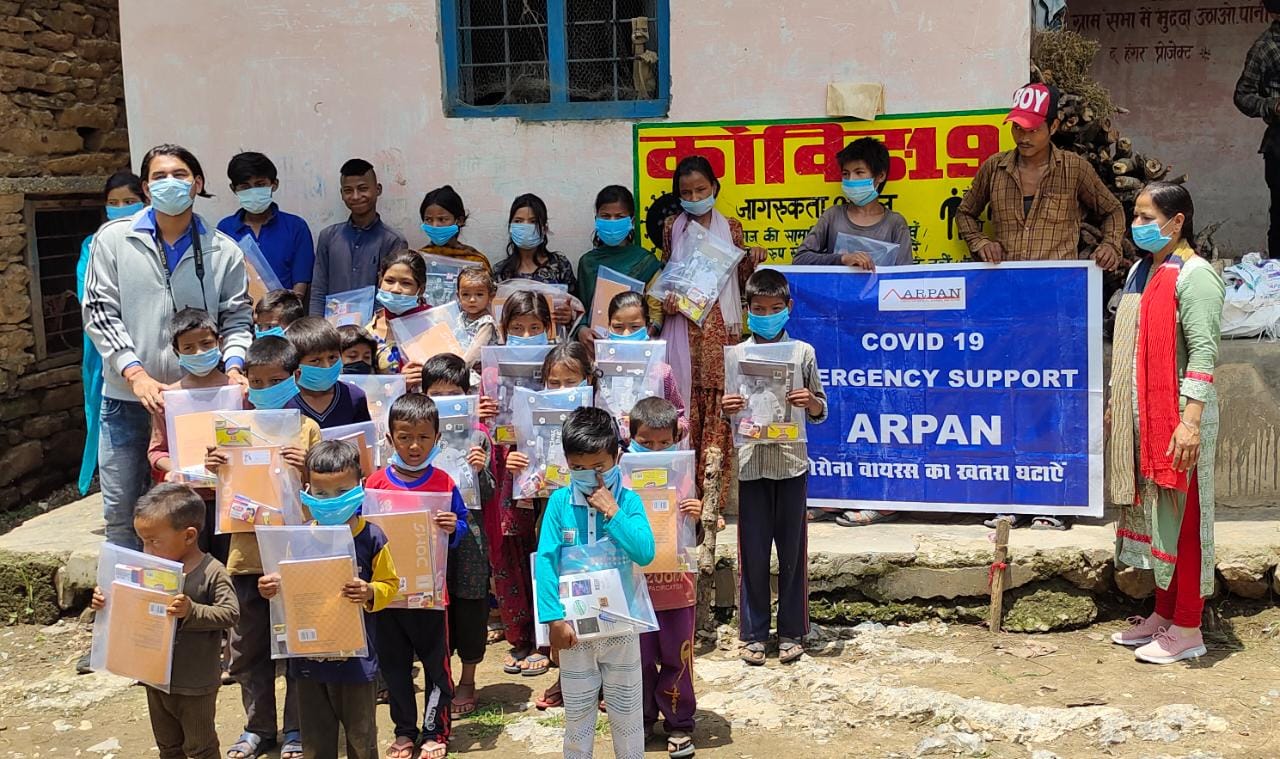 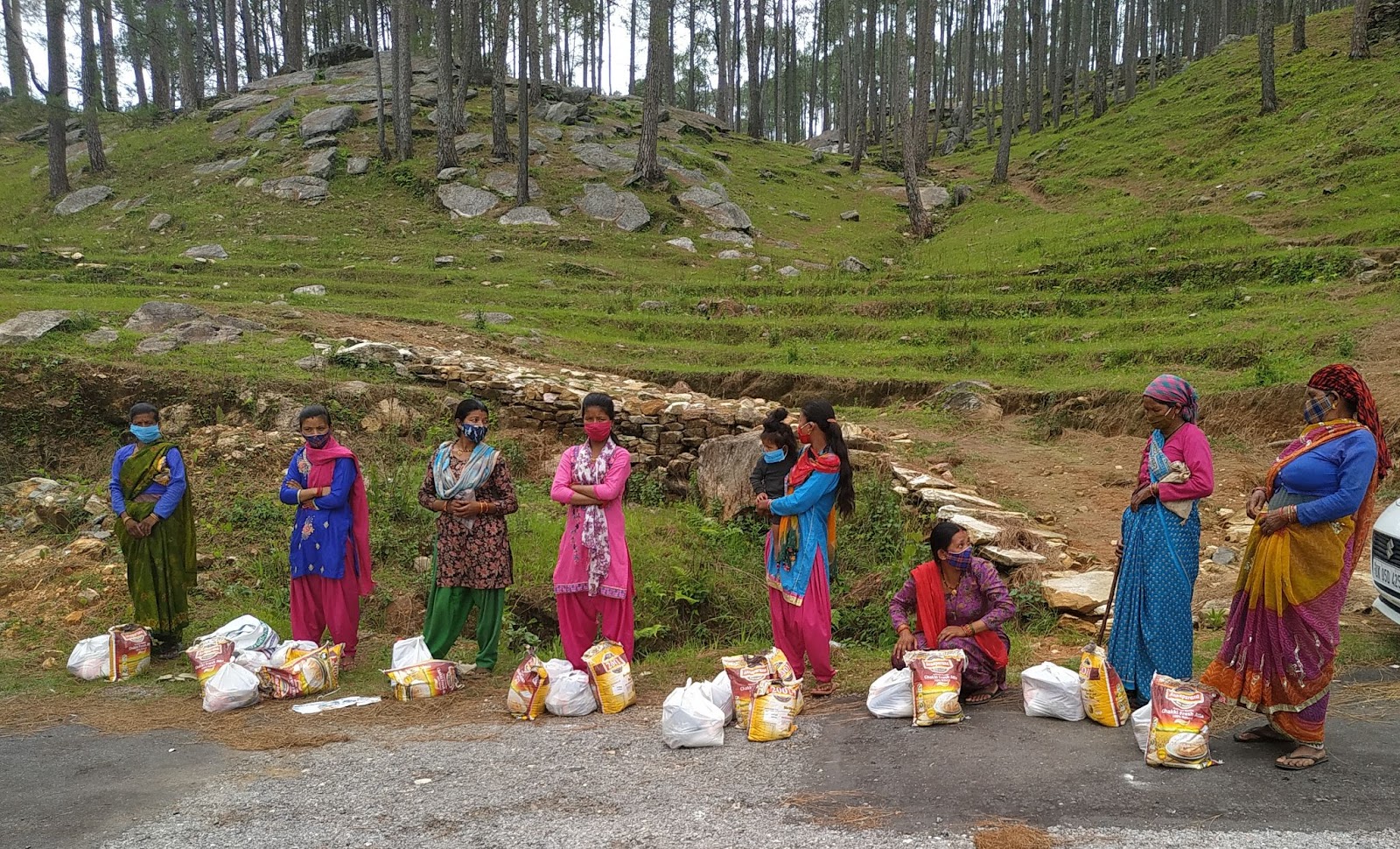 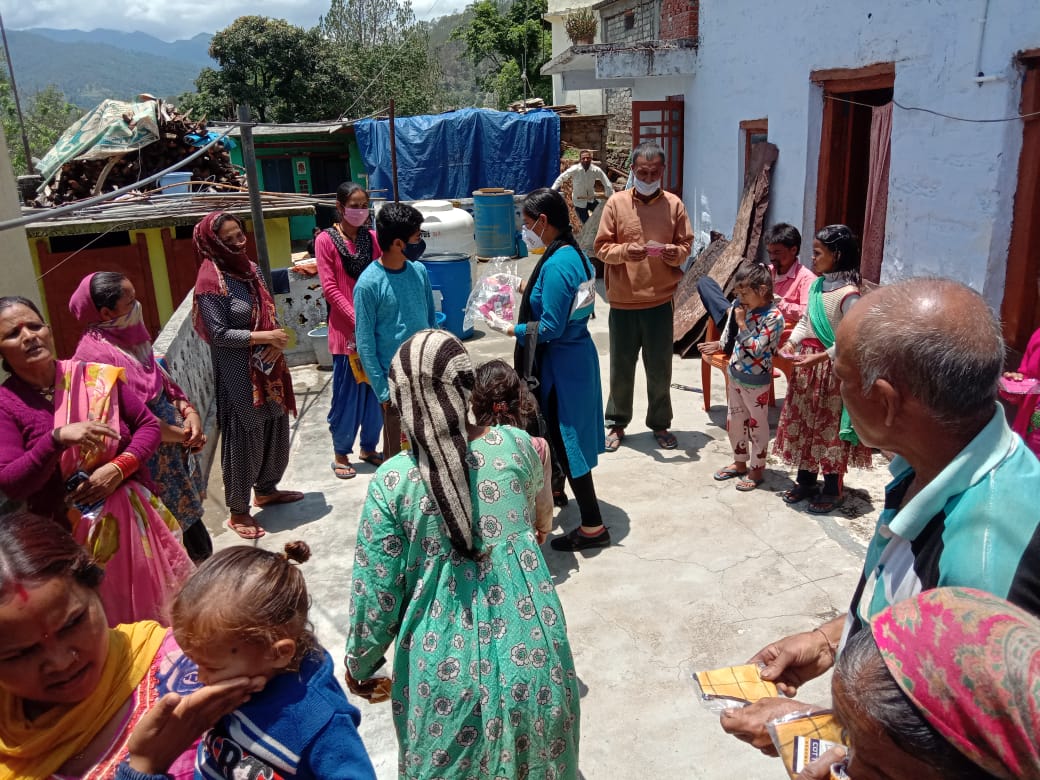