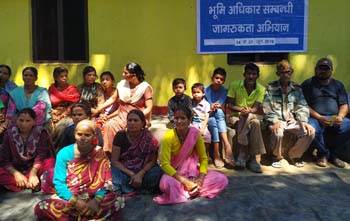 Women’s land and forest rights is one of the burning issues of women in the region. The women rights and women farmers’ collectives have been voicing their concerns since long. Recent happenings at the state and national level have further marginalised the community whose livelihood and very existence and dignity is from land and forest.

The Supreme Court order for eviction of tribals from their roots - forest land - is injustice to the Forest Rights Act, 2006, which states that injustice has been done to tribals. An amendment has been proposed in The Indian Forest Act, 1927, wherein the rights of Van Panchayats have been considerably cut down. It states that if Van Panchayat management is not found to be appropriate, they can be taken over by the Forest Department.

Issue of rehabilitation of people due to construction of Pancheswar dam is highly sensitive and caused a lot of misunderstandings and confusion amongst the people who will be affected. The DPR of the dam has been finalized. People have been told that they will be rehabilitated in the plain terai region.

Community affected by natural disasters (2014 and 2017) has not yet been compensated. Agricultural land, which is the very source of livelihood of women, has been washed away during flash floods. But the women have not been compensated accordingly.

Moreover, single women have been demanding land in their name for dignity and livelihood.

Keeping the above issues in view a campaign was carried out by women collective leaders, staff of Arpan and volunteers from June 24 to 26, 2019.

The campaign included mobile van with loud speaker, padyatra to villages where there are no roads, rallies, slogans, pamphlet distribution and sticking bills/pamphlets in strategic places. Street plays and village meetings were organised to discuss views of people. Signature campaign was also taken up.