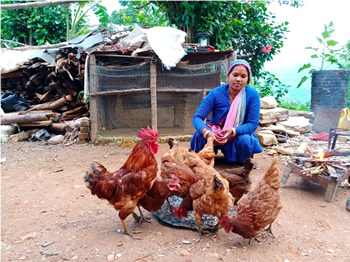 Geeta, a 28 years old dalit woman farmer from village Dewal Askot, block of Kannalichhina has a son who is 5 years old. Her husband Kharak Ram (32 years old) works at a border road construction site. Geeta is a hard-working farmer. The family owns 0.040 hectare of land, where she has made a kitchen garden. She has also reared 10 hens and a cow.

Geeta recalls that 4 years back a women farmer collective was initiated with the support of Oracle, where in 19 dalit women from economically poor families had joined and she was one amongst them. She says that “I was elected as the president of the collective by the fellow women farmer members, three months back.” Geeta had availed all the opportunities by attending trainings, meetings, workshops, and exposure visits. There are four vermi-compost pits in her village, where women are collectively producing organic compost. There has been an increase of 15 to 20% production.

Geeta’s husband lost his job during the lockdown and presently he is unemployed. She is the sole bread earner in the family. She made a nursery, where she sold saplings of brinjal, capsicum, green chillies, radish, and spinach and earned Rs. 820/- . Besides the consumption of fresh vegetables at home she also earned Rs 800/-. Last year she had received 50 chicks from the animal husbandry department. During the lockdown she earned Rs.2500/- by selling the eggs and is still engaged in the work. 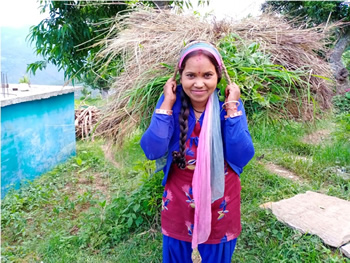 Geeta says “earlier too we were working on our small piece of land, but the yield was not even enough for our own consumption. New methods of increasing yield along with information on government schemes, our seed and goat bank boosted our household income to more than 20%. Now, we are also asserting our rights as women farmers. Thanks to the support extended by Oracle, Action Aid and Arpan. “

The lesson learnt is that only sustainable agriculture practices like vegetable cultivation and on-farm/off – farm activities at the household level can sustain our livelihood. Initiatives like seed bank helped in maintaining the consistency of the work at the field level. The myth that men in the family are the main bread earner’, as they bring cash in the family – also broke. The unpaid work of woman gained recognition at least at the family level.