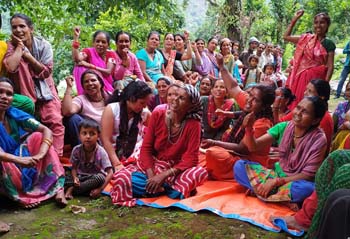 Women rights groups formed in more than 30 villages assert their rights to live a life with dignity, gender equality and equity, for self and others. Women leadership has emerged and has been strengthened to address cases of violence and discrimination on women and girls.

During 2018-2019, around 20 cases have been raised, confronted, reported and some also solved. Amongst these there are cases of child marriages, domestic violence and desertion.

Single women from these groups have raised their voice against discrimination on the ground of their being isolated from their basic rights to dignity, property and livelihood. The most amongst them are women who have lost their husbands, followed by deserted, divorced and unmarried.

During a workshop on single women rights organised by ARPAN, women voiced their concerns and have demanded for their basic rights to life and livelihood.